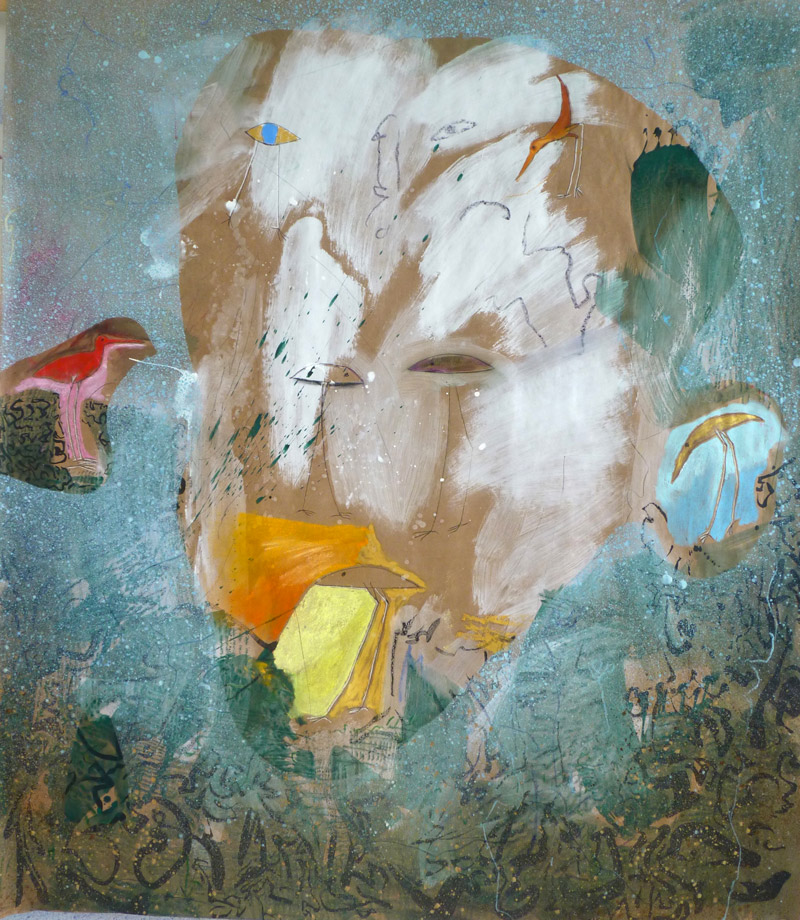 I – Conversation about … painting

Painting, a sign language
The painter should not talk, bequeathing just his painting. Once he starts talking, he gives away something of his function, which is to let other people appreciate his picture, or not, as the case may be. It seems to me that to say too much about the work confines and shrivels its potential, as if stuffing it (like a taxidermist). I am suspicious of the artist who stipulates that such and such a message must be seen in his painting, and nothing else. So what can I say about my own painting ? I prefer being a polyglot. In that way, words never totally hem it in.

There’s nothing to be seen in it
Daniel Arasse puts his finger on a basic fact : we see nothing, we are in absolute darkness, we only see the image that our brain has seen fit to re-create, behind our eyes in a way. What is more, our brain can only decipher a minute part of the vibratory field. Between infra-reds and ultra-violets, there are worlds that are invisible to our eye, which should have the effect of making us modest… Thanks to art and poetry, however, we try to broaden our spectrum of vision and understanding.

Letting people imagine
Forty years later, I can still recall the words of one of my teachers: “If you have a floor cloth, don’t throw it in my face.” Herein lies one of the painter’s basic questions : does he toss at visitors a canvas that will really impress them, in every sense of the word, or will he let people imagine ? What part does he give to the message ? If he is just in the mode of pure intentionality, he will produce a propaganda picture. Art has too often been used to deliver slogans.  There is another way of attracting the customer by whispering to him : Come and have a look, come and see how pretty my image is… Starting from there, art finds itself re-incorporated in a commercial market circuit. For me, one of the really useful things about art is what I call the exhaust, that invisible part which, over time, gradually broadens our way of seeing things, and acts as a developer (in the photographic sense). From the Chauvet Cave to the present day, we should do our best, in the face of that beautiful legacy from the past, to modestly add our own stone. And avoid toppling into the orgy of the art market, which has warped everything, giving exorbitant sums of money to works which are not basically useful. Not all works, of course, but, where some are concerned, we are entitled to wonder what they really contribute to widening our vision.

The age of disillusionment
In this age I see the consequences of the First World War, and its traumas rarely or never talked about. History books invariably serve one and the same argument—heroes, the field of honour… People are forever doctoring the facts, generation after generation, while all that butchery has had serious consequences for art, involving a form of nihilism, in particular the idea that beauty does not exist.

Conceptual Art has underpinned that shock wave, that trauma, and come up with the idea that we look at terror. There has been a totalitarian trend among certain Conceptual artists, for whom the keyword was transgression, becoming something akin to a religion. The mere fact of uttering a criticism made you guilty of having a bourgeois vision of art, and painting was suddenly declared decadent, and anti-revolutionary…

Towards a new movement
My answer to that tendency ? Carrying on my work, existing come what may, and hoping that I am not alone. When an artist offers an authentic work, that work encounters its public. Conceptual artists won’t stop this movement. Under my belt I’ve got thirty years of reading, reflection, painting, and resistance, and it seems to me that there are more and more of us today who are keen to shift to another phase.

Bernadette Costa Prades is a writer and journalist. She has published two biographies of Frida Kahlo and Niki de Saint Phalle with Libretto, and the biography of Tina Modotti, with Editions Philippe Rey.  In her books she enjoys shedding light on the creative process, and the sensitive and poetic approach of artists, who often find their source in their childhood. Her interviews with the painter Christophe Tissot follow this same path.